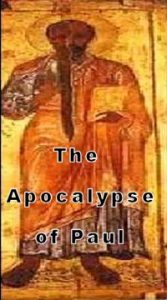 The Apocalypse of Paul (Apocalypsis Pauli, more commonly known in the Latin tradition as the Visio Pauli or Visio sancti Pauli) is a fourth-century non-canonical apocalypse considered part of the New Testament apocrypha.The original Greek version of the Apocalypse is lost, although heavily redacted versions still exist. Using later versions and translations, the text has been reconstructed. The text is not to be confused with the gnostic Coptic Apocalypse of Paul, which is unlikely to be related.

The text, which is pseudepigraphal, purports to present a detailed account of a vision of Heaven and Hell experienced by Paul the Apostle; "its chief importance lies in the way it helped to shape the beliefs of ordinary Christians concerning the afterlife"